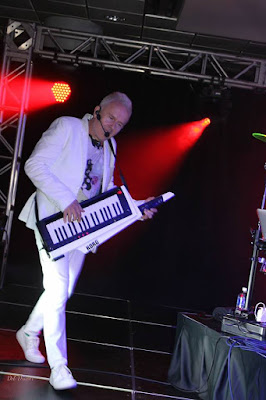 “Dream Into Action” occurred for this Wire Megazine photojournalist on May 26th at OLG Woodbine Racetrack in Toronto. Howard Jones has defined techo/new wave/electronica for 3 decades and is breaking new ground and still going strong. Howard has been going back into the vaults and remastering his greatest hits to introduce those songs to all generations.  Start to finish this 90 minute show was brilliant and a flash back in time as the stage was filled with colorful fluorescents, that lit up with every techo, addictive Hojo beat we love. One minute I was 13 and now 45+ yet I still adore Howard Jones music; however, in more of a personal way, as I wasn’t just a fan at this show.  I was granted permission to shoot photos at stage level at Woodbine OLG and got to meet him after the show.  Gentle and shy off stage; yet, under the bright lights with headset mic and keyboard within reach, Howard’s persona exploded full of passionate energy.  It was magical to observe his superb showmanship.  He engaged the audience and incorporated them into his show.  Hearing Hojo fans (80s teens now adults), singing word for word, loud and proud as HJ continued to play, letting us sing his lyrics back to him, totally PRICELESS!  Old and new songs were filled with philosophy, creating an inner peace, giving fans confidence and encouraging us to express our feelings. This show brought a back to the future feel incorporating the future of technology and the past lyrics together with present day story telling, giving a totally uplifting experience.  His musical genius was fully fueled with surges of nostalgia featuring world renowned drummer Jonathan Atkinson and keyboardist/producer Robbie Bronnimann, proving futuristic longevity. High energy expelled as Howard bounced from keyboard to sequencer to KORG Key-Tar.  This magnificent 61 year young superstar was rejuvenating in rare form,  full of organic new elements.  His favorite recorded song “Hide and Seek” was perfection same with “Like To Get To Know You Well” and “Life in One Day”, he’s still got it vocally, holding those high notes effortlessly.  Goosebumps were reactivate as he brought “No One Is To Blame” into his set, once again hearing the audience singing above Howard throughout the entire song.  Fanfreakintastic rendition of “What Is Love?”  Showing he has no signs of ever slowing down, as he introduced 2 NEW originals “Joy”, “The Human Touch” from his most recent and ambitious project “ENGAGE”, which is a 4 part quadrilogy adventure.  It is a multi-media interactive APP for your smart phones, once uploaded and active at a live Hojo show, Howard can trigger a signal to the cells and activate a visual sequence that mirrors what is being sung on stage. These 2 new pieces reconnected me to the past where “Humans Lib” & “Dream Into Action” left off, and he wasn’t done yet.  Introducing yet another original,  “The Eagle Will Fly Again” from the soundtrack “Fly” from the movie “Eddie the Eagle”: based on Eddie Edwards, Britain’s 1st Olympic sky jumper.  Simply awe-inspiring.  This Gold & Double Platinum master of Synthology has never been idle with 15 top 40 hits and over 8 million albums sold, 25 albums (live, EPs, CDs, remastered works) solidifying his musical legacy into music history. Grabbing my attention with his Encore choices, 1st his 83 release “New Song”, followed by a standing ovation and chants of Howard, we love you, bringing the trio out for a 2nd song encore finale with an unexpected surprise. His huge hit “Things Can Only Get Better” (now a Landis Remix in 2013) by Cedric Gervais & HJ, climbed up the billboard dance charts then in the 80s and in 2013 for an impressive 14 weeks, & they projected this remix giving a new musical twist leaving the audience thirsty and thoroughly impressed check this out https://youtu.be/oeSJ4f9_MRE

HJ has embarked on his longest ever North America Tour yet; with Barenaked Ladies with O.M.D (Orchestral Maneuvers in The Dark), and Australian tour with Kim Wilde, Feb. 2017 an all 80s cruise & his solo tours. “Bounce Right Back” Howard Jones has!

visit www.howardjones.com  Also, stay in touch with www.woodbineentertainment.com there is lots to see & do.