One of the most musically explosive, magically addictive sounds are revving up their mystical engines northbound for an up close, intimate & back by popular demand showcase on March 30, 2018. All the way from the Hudson Highlands of New York and touching down in Toronto for 1 night only at Hugh’s Room Live where they will release their unique & enchanted blends of electrifying blues, rockin’ hillbilly folk with a strong energetic resemblance to that of Tom Petty meets Pink Floyd.  I had the distinct pleasure to have tossed a few of my usual questions in the direction of The Slambovian Circus of Dreams leader of the pack, co-producer, front-man, guitarist and main songwriter Joziah Longo, multi-instrumentalist Tink Lloyd, guitarist/multi-instrumentalist, musical partner, main engineer and co-producer Sharkey McEwen and veteran drummer Felipe Torres.

DEB:   Long time no see, welcome back to Toronto! Thanks for taking the time out of your extensive tour schedule to let The Wire Megazine catch up with you. I am one of the city’s assiduous music scene patrons, catching a rate of one or two shows a week and might I say that your show stands out as truly unique. Not many original acts I feel make a direct electrifying, magical and musical connection right away with their audience, as strongly as you do. Back in 2015, I witnessed your show for the 1st time, and I still feel that triboelectric effect when I listen to your tunes today. For those that are unaware of this feeling, well, it’s a contact electrification where certain materials, such as my mind, become electrically charged after they come into frictional contact with the specific material, like songs by The Slambovian Circus of Dreams. 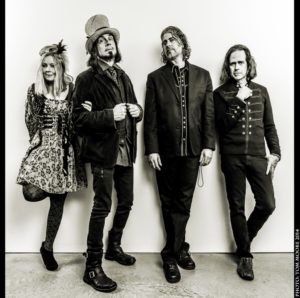 (Photo to the left  ~ Tom Moore)  Overall, your band members average years of professional & extensive musical experience traces back to your mid-teens and your act’s sound has carved quite a magical path. Some 30 years ago in the late 80’s, in Sleepy Hollow, New York, with Tink and Sharkey by your side Joziah, your innovative creativities inside your prog rock act The Ancestors, allowed all of you to become part of music history as 1 of the 1st American acts allowed into China, that ended a decade-long ban on Western music, what a milestone! Your current lineup has been going strong since 1998 with various band title transformations from Gandalf Murphy & The Slambovian Circus of Dreams to The Grand Slambovians to currently The Slambovian Circus of Dreams.  Photo Left to Right: Tink Lloyd, Joziah Longo, Filipe Torres and Sharkey McEwen.

1.)  DEB:  Was there a specific reason your band’s name changed various times throughout your in-depth career?

TSCofD:  “Yes, just to keep things interesting for people. We figured as long as ‘Slambovia’ was somewhere in the name, our fans would find us. With ‘The Grand Slambovians’ album, it really seemed a no-brainer to use that name for the tours at that time.” 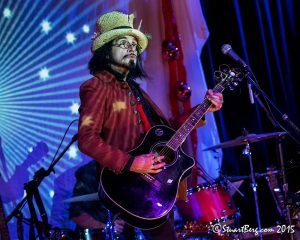 Joziah Longo (lead vocals, guitars, harmonica), born in Philadelphia, grew up playing traditional country, folk and mummers music with his father. Performing professionally from the age of 13 doing Dylan covers, he moved to New York to pursue his muse. Playing venues ranging from CBGB’s to Carnegie Hall as a headline performer, Joziah was also the first American songwriter invited to perform in mainland China in the early 90’s, signaling the end of a decade-long ban on Western music. Since 2010 Longo has worked with Broadway’s Circle in The Square Theater in New York City. Joziah wrote the music for 2 original productions, directed by the legendary Theodore Mann and another project with new theater director, Jonathan Mann is in planning stages.  Photo by Stuart Berg. 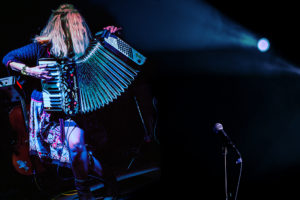 Multi-instrumentalist Tink Lloyd (accordion, cello, flute, theremin) comes from a long line of feisty Irish musicians which brings a spark to the band’s music as well as performance. She considers herself a musical ‘stylist’, dressing the songs as needed, with an ever-growing pile of instruments on her side of the stage… Tink has worked with Joziah since meeting in the 1980’s. Photo ~ Stuart Berg. 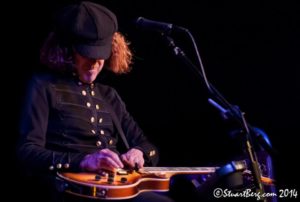 Sharkey McEwen (guitars, mandolin, backing vocals), a longtime musical partner of Joziah, has Louisiana roots but grew up in L.A. where he cut his teeth as a player on Sunset Strip before coming to New York in the early 90’s. His inventive, fluid playing compliments Joziah’s songs, never upstaging the story. He has been the band’s main engineer co-producer with Joziah since their first album. Photo ~ Stuart Berg. 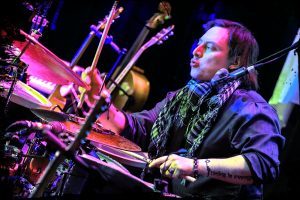 A New York area native, Felipe Torres (drums, percussion) though young, is a veteran of the music industry as a sideman and recording artist, supporting many legends of rock and pop. Having toured extensively throughout the USA, Canada and Europe, performing in a multitude of musical genres, Felipe brings a creative feast to the Slambovian Experience. His playing has the vocabulary of the best of rock, with an exotic flair.  Photo ~ Stuart Berg.

2.)  DEB:   Have you seen or felt a major shift or change in music today compared to when your career first began?

TSCofD:  “It seems that music has really come full circle. It used to be more narrow and niche-oriented, but with the advent of the internet and especially and social media, people are much more open to all different styles. More non-linear so to speak. That works well for us, our music has always been pretty non-linear which has made it hard for people to categorize us- that has its good and bad sides, like what festivals to include us in or not – ha ha!”

Your act has become a recognizable household name, 1 of the most requested international acts across the globe.

3. (A) DEB:  How does it feel to be 1 of the world’s greatest acts that have stood the test of time and have managed to create and tour year after year, accomplishing 18 released masterpieces in just under a 20 year discography-ranging from singles, videos, live concert recordings to your (2014) Greatest Hits release  “Box of Everything,” 4 critically acclaimed studio albums “The Grand Slambovians” (2010), “The Great Unravel” (2008), 2004’s double-disc “Flapjacks From The Sky”, and “A Good Thief Tips His Hat” (1998)?

TSCofD: “Maybe we’re a household name in the houses of the more ‘esoteric’ music fans! We’re really lucky to find fans all around the world, especially in the UK, even though we’ve managed to stay under the radar for the most part.”

3. (B)  DEB:  What is your secret to longevity in this crazy world we call music?

TSCofD:  “Just being true to ourselves, and as honest artistically as we can be. We always try to give our best no matter what circumstance we find ourselves in. A big part of being creative is learning to work with what you have, whatever the limitations are. Limits can actually make your music have more of an edge and excitement than if you have everything easily accessible. All of our albums were made under extreme duress, that added to the vibe somehow. In the end, we always push to give as much as we can doing records or live shows to make sure we deliver to the fans.”

4.)  DEB:   Have you different arrows within your quiver to write with Joziah, as I hear various musical styles presenting one unique piece after another, not one song sounding similar to the next

JOZIAH:  “I grew up playing trad country and early British invasion music with my Dad and learned the whole early Dylan catalog at a young age. That vocabulary is pretty ingrained as a reference point to work from. In addition, I often get the feeling that there’s some significant help from ‘the other side’ by the ghostwriters that hang around in my basement!!!”

5).  DEB:  Would you say your songs were based primarily on your personal experiences or your life in general?

JOZIAH:   “Songs serve so many different purposes and are birthed in so many different ways. Sometimes an issue may be really weighing on my mind and that becomes the seed of a song. Other times, an emotion that is beyond my comprehension wants to express itself – that was always the function of a shaman or bard historically to express that ‘message’. I sometimes feel myself in that position, delivering a ‘message’ to the tribe…”

JOZIAH:  “I definitely have my influences and loves… growing up on the Beatles and more quirky side of British folk and Dylan was where I began my songwriting. These days, I listen to bands that are more experimental in instrumentation and outside the box. Especially Canadian bands that I discovered recently at the International Folk Alliance. A few of the Canadian artists really blew me away. That’s not a stroke, that was my real experience.”

7).  DEB:   What is next for The Slambovian Circus of Dreams, perhaps a new album recorded with Canadian engineer Dio Tadin (of Clear Stone The 2015 Wire Magazine Awards multi-nominated Rock Band and Indie Song of the Year act)?

TSCofD:  “We’ve been working with Dio, who moved his studio down to New York for a few months to work with us! He’s been an amazing support on this album, a great talent as an engineer and songwriter in his own right. The chemistry between us and Dio has produced some of the most exciting sessions we’ve ever done. He’s working on our next album, as well as his own and a few other projects as well… he’s a real force of nature! He’ll be at the show lending a hand and perhaps doing one of his new songs with us as well…”

Left to right: Dio Tadin a professional musician/recording studio engineer & songwriter.   Standing in the middle Anto Thistlethwaite who lent some magic to a few tracks! You may recognize him for his contributions to some of the best Waterboys and #SawDoctors work and on the right Joziah Longo, the singer/songwriter instrumentalist and TSCof D’s frontman.

8).  DEB:  What draws you to perform annually at Hugh’s Room Live in Toronto, as 1 of only a few  Canadian dates on your North American tours and what can we expect at your March 30th, 2018 return performance.

TSCofD:  “We’ve been playing Hugh’s Room since we performed at our first Canadian festivals a few years back,  Summerfolk, Mariposa, Ottawa Folk/Blues Festival. They were amazing experiences, we had never spent time with the Canadian cousins in their natural habitat before. Way cool! A lot of the audience that comes to Hugh’s Room is connected to the folk/independent music scene in Ontario, so it was a natural thing for us to play there. This show will give everyone a chance to hear some of the new album as well as classic Circus tunes they all love, with the added excitement of the Tadin brothers on hand as part of the band!”

” From the Hudson Highlands of New York to the mystic shores of your imagination, comes The Slambovian Circus of Dreams.  With a sound both strangely familiar, yet strikingly new, The Slambovian Circus of Dreams steps forward, as 1 of Americana’s most original ensembles.”   https://vimeo.com/125685310#at=33 So hurry don’t delay, click this link today to purchase the $25-$30 tickets to this stellar performance, held at 8:30 pm at Hugh’s Room Live  2261 Dundas St W – Toronto.”

STAY IN TUNE with this fast-moving entity in a city nearest you!  www.slambovia.com

Thank you for your time, The Slambovian Circus of Dreams it was pleasure catching up!