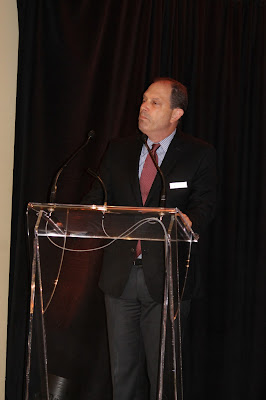 The evening began with the Royal Ontario Museum’s Director and CEO, Josh Basseches, explaining, “We are proud to showcase and honor the beauty and enduring power of Anishinaabeg art and culture.  With this exhibition, visitors have the opportunity to explore the shared connections between Indigenous and non-Indigenous Canadians and in the process, gain a deeper understanding of the Impact Anishinaabeg art and beliefs have had on shaping our national mosaic.” 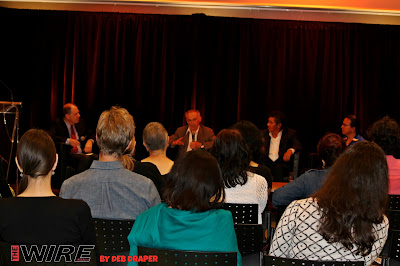 Three of Canada’s top artists and cultural icons made up the panel of curators. 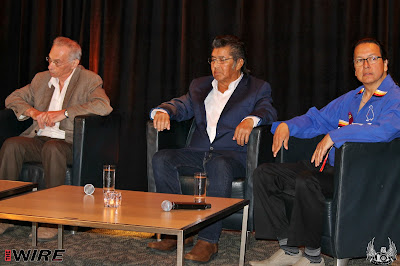 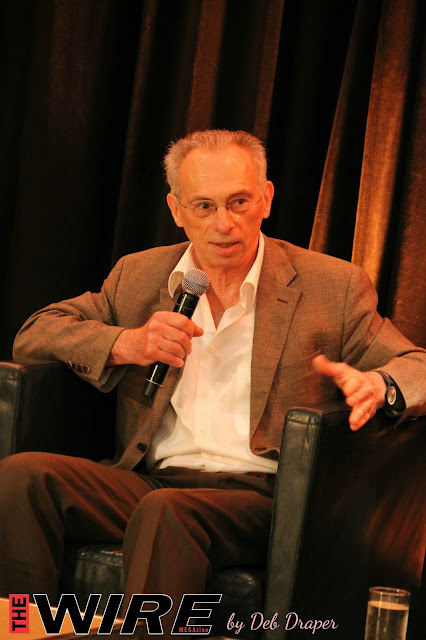 “art moves with people and changes in interesting directions where communities intersect,” says Arni Brownstone, a curator for the Anishinaabeg: Art & Power exhibit.  He is a 43 year ROM member, and a Fine Arts York University undergraduate.  Arni is also, 1 of the 3 assistant curators at the ROM primarily in the North American plains, southwest U.S., and Latin American collections, in the ROM’s Daphne Cockwell Gallery of Canada: First Peoples and The Shreyas, Mina Ajmera Gallery of Africa, the Americas, Asia-Pacific and of the Museum’s 30, 000 ethnographic pieces in the collections of the Americas as well. 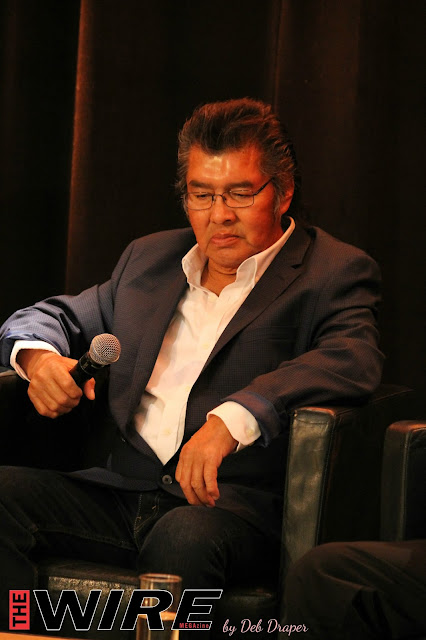 Artist/painter and Woodlands School of Art member all the way from North Caribou Lake First Nations Saul Williams who was born in 1954 when his family moved to Weagamow Lake to live in North Caribou First Nation Reserve, where he is a Band Member.  Saul was a laborer and school counselor as well, he sold art and in 1984 he became the 1st Indigenous artist on exhibit at AGO (Art Gallery Ontario).  Dr. Mary Black bought Saul tubes of acrylic paint and his first painting of a raven was painted on her wall, which now hangs in the ROM’s collections.  Right now he is an education director at North Caribou Lake Education Authority where he teaches Aboriginal knowledge, language, traditions, culture & is involved with the Educational Funding with the Federal Government. 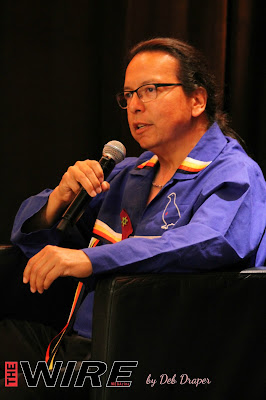 is a Program Co-ordinator of Anishinaabemowin Revitalization Program at Lakeview Elementary School in M’Chigeeng Manitoulin Island, is a curator for this exhibition, is a writer, editor and passionate historic educator, who proudly talks about tools used by his people in the photo below. 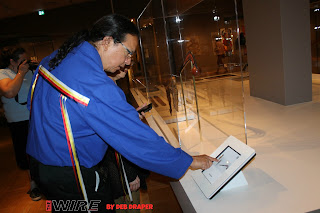 I was drawn by the power and intrigue of the painting below on the right, a beautiful display of imagination and color by Daphne Odjig, entitled Thunderbird Man, 1974. 2001.168.364 Wikwemikong First Nation, Manitoulin Island, Ontario. This masterpiece exudes talent, of the transformation which allowed a young man to live with a Thunderbird Woman. 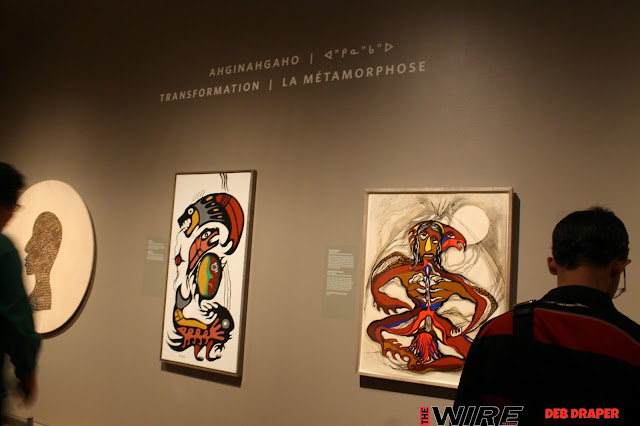 Rare glimpse of Saul Williams being interviewed as he educates on his work of art. 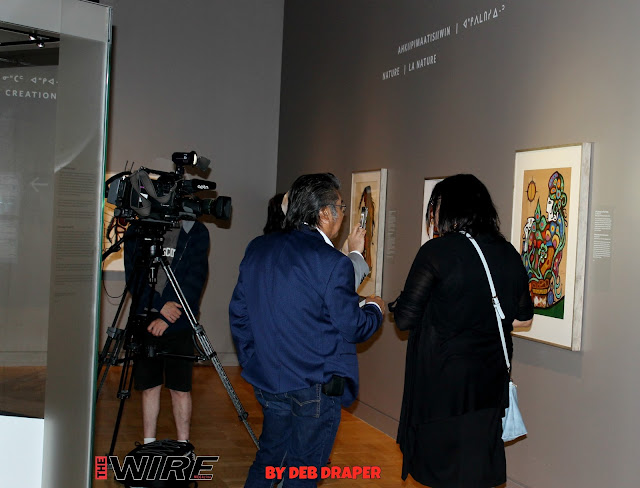 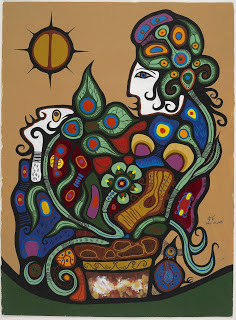 The Royal Ontario Museum’s newest exhibition, Anishinaabeg: Art & Power held a sneak peak viewing to an up close and personal audience on Tuesday June 13th, with a one-on-one Q & A session with curators and historical ROM staff, guests and media.  This exhibit opened on June 16th as part of the Friday Night Live theme events series.  It was a roller coaster of emotions, as I learned in depth about the culture, art and power of the most diverse cultures in our North America, the Indigenous Anishinaabeg people regarding their life’s struggle and journey.  Was truly powerful in this dimly lit exhibition, you could almost feel the presence of elders spirits among us.  A highlight for me was when I was viewing the 4 minute video based on artist/curator Saul Williams introducing this exhibit, when out of no where appears Curve Lake/Peterborough singer, song-writer & entertainer Missy Knott and artist/curator Saul Williams who appeared at the same time too.  After I got to introduce Missy to Saul I captured the moment by this marvelous piece that drew in my heart due to it’s magnetically soothing musical feel with use of bright yellow and red, ( my 2 favorite colors).  John Laford’s 1977 painting Drummer  expresses the high energy and emotion of the men who sing while beating their drum. 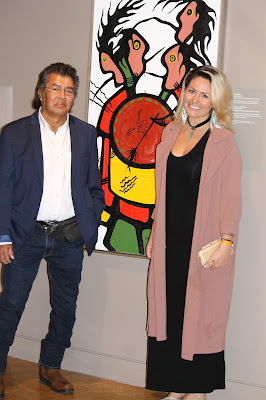 40 two and three dimensional paintings, artifacts & tools all originating from Quebec to Saskatchewan and as far south as Minnesota, were colorfully displayed among the 19th and 20th century clothing created from warm and rich hues of beads. 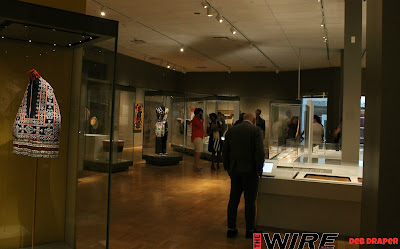 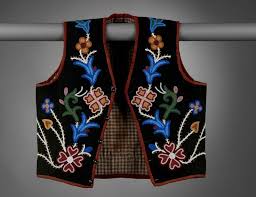 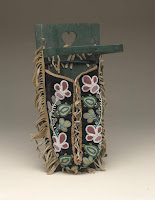 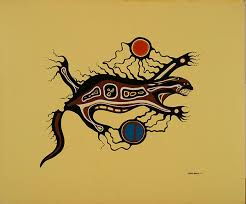 Guests in attendance were invited to visit the night display as well, tour the ROM and food sample or enjoy the musical styling of multi-award winning singer and song-writer, Nashville recording artist MISSY KNOTT & her guest guitarist Toronto’s Adam Tario.

They entertained for 2 hours with some of her greatest hits “Erica’s Song” from Missy’s 1st Album FOR NO REASON AT ALL, “Our Song,” “Letters to You” & “My Sister’s Heart” from Missy’s 5th and latest EP – MY SISTERS HEART mixed in with some popular covers that they converted for a magical sound all their own, like their bluesy cover version of Wagon Wheel, was simply marvelous and totally over the top. 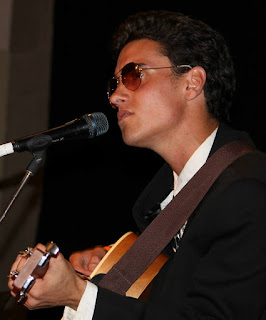 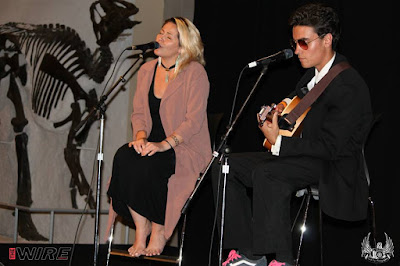 Missy exudes phenomenal energy missing in music today.  Only 27 years old, in music 10 years, yet, she has the passion of a seasoned musical veteran.  Her gifts are purely one-of-a-kind.  Stay in tune with Missy www.missyknottmusic.ca at https://www.facebook.com/profile.php?id=502600702 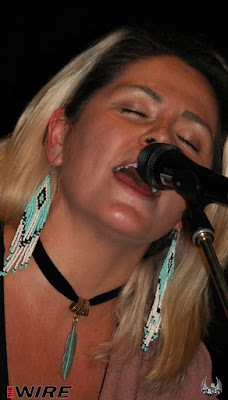 and you don’t want to miss her talents and her bare foot confidence!  Hurry don’t delay, get your tickets for August 18th, 2017 today for
Havelock Country Jamboree, Missy performs LIVE at 2:30pm 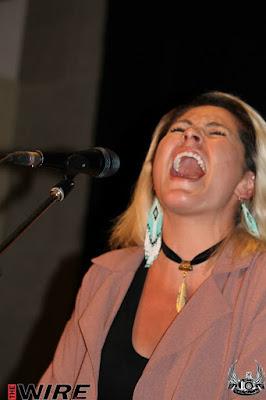 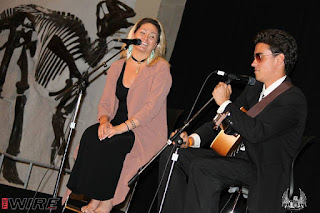 Food Celebrity.  I was pointed in the direction of Canada’s Chef Jamie Kennedy who was in attendance and is well known mostly for his restaurant Gilead Cafe (2003-15) & for his Jamie Kennedy Kitchens here in Toronto.  Jamie will be returning to the ROM towards the end of Summer.

The ROM is globally recognized as an essential destination for making sense of the changing natural and cultural worlds. The Museum holds approximately six million objects and specimens in its collections and features over 30 galleries showcasing art, archaeology, and natural science. It originates, and partners with other international institutions to present, crowd-pleasing and critically acclaimed exhibitions.

Royal Ontario Museum (ROM) first opened it’s doors in 1912, is located in the center of Toronto and serves over 1 million visitors yearly.   Make sure you visit  www.rom.on.ca to stay in tune.

We use cookies to optimize our website and our service.
Manage options Manage third parties Manage vendors Read more about these purposes
Preferences
{title} {title} {title}