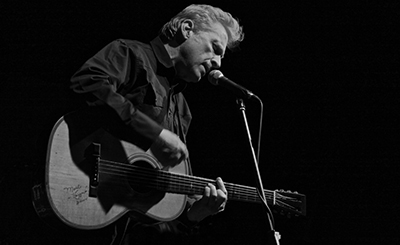 Known throughout North America as the lead singer and one of the founding members of multi-platinum country-roots group Prairie Oyster, Russell deCarle has spent the last decade carving out a solo career, concentrating on songwriting and rhythm guitar.

Alone in this Crowd is the title of deCarle’s most recent album, and it feels like the soundtrack of a movie in the days just before they invented Technicolor. The sound may surprise those who remember Prairie Oyster, but truth is that the band was always more than a “country” band, and deCarle’s warm, burnished and intimate voice has always honoured an eclectic range of songs. True to form, Alone in this Crowd offers a fluent collection of songs that mix southern soul and restrained balladry, with obvious touches of jazz, blues, old-school country, and western swing. deCarle’s songwriting has absorbed all those influences, and he avidly listens to both soul singers and the men and women who made early country music so compelling.

Russell will be joined at Market Hall by long-time friends and musical compadres Steve Briggs on guitar and John Sheard on piano.